8 Investing Mistakes I Made With My Roth IRA 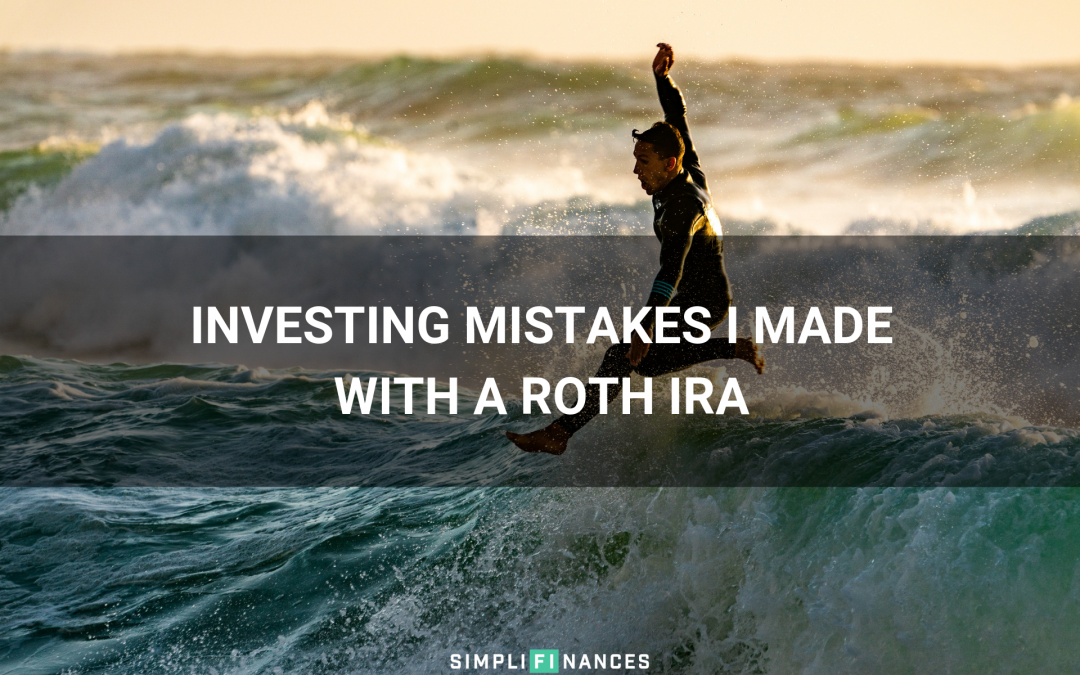 When you were younger, were you ever told investing was important but didn’t have the slightest clue how to get started?

When I was a teenager, I knew compound interest was important and wanted to get started as soon as possible.

But this led to many investing mistakes! Things I wish I could go back and change. But sometimes the best way to learn something is to just start doing.

So here’s 8 investing mistakes I made while getting started with my Roth IRA.

The first investing mistake I made was I started out by putting money in a CD, buying silver coins, or letting it build up in my savings account.

Turns out, these were bad investments and I wish I could have started with something different.

This was before I even knew what a Roth IRA and I was simply interested in investing and so a Certificate of Deposit and silver coins seemed like a logical thing.

2. Waited Too Long to Get Started

When I first started earning income at the age of 12, I wish someone would have told me to start my Roth IRA.

I didn’t realize how powerful Roth IRAs were until the age of 22.

That’s when I finally decided to start one.

That’s 10 years during great economic conditions that I didn’t have my savings invested in the market. Even though I felt like I waited too long to get started at age 22, according to Motley Fool most people don’t start saving for retirement until age 31.

When I decided to start one, I was banking with USAA and spoke with one of their financial representatives.

I told him I would like to open a Roth IRA which required a minimum of $500 to fund and an automatic monthly contribution of at least $50.

I trusted whatever the guy from USAA said, not really knowing what I was doing. Once I signed the papers, I was just glad I had started one.

This later turned out to be a big investing mistake.

The person from USAA told me what he thought would be a good investment for me and I took his word for it.

4. Didn’t Know What I Was Invested In

Because I was young, being somewhat aggressive was important to me. I went with the most aggressive 100% equity mutual fund (so I thought), which was called the USAA Cornerstone Aggressive Retail (UCGAX).

It was made up of large-cap and blended funds and has a Morningstar rating of below average.

I started tracking my returns over those few years and wanted to understand how it all worked but it somehow always ended up being quite a bit lower than benchmarks such as the S&P 500 or Russell 2000.

Looking back, I honestly had no idea what I was invested in. At least I got started and was putting money into it every month, right?

Fees were not something I considered when I opened a Roth IRA. It was something we didn’t discuss on the phone, I just took the reps word for it.

However, a year or two later, I started learning about fees and the impact they can have on a portfolio over an investing lifetime.

I dug into the fine print of the USAA Cornerstone Equity Fund and figured out how much I was paying in fees (more on that later).

Turns out, companies like to make it difficult to find how much you’re paying in fees and what the long-term impact on a portfolio would be.

While digging into the fine print years later, I discovered I was invested entirely in actively managed mutual funds and was being charged a 1.2% expense ratio!

Meaning, they charged 1.2% of my portfolio annually.

These are high fees! And I didn’t even have access to a financial advisor.

And the fees were even higher when you factored in trading costs, cash drag, etc.

The person on the phone told me, “don’t worry so much about fees because what you’re paying for is someone to actively manage your investment instead of just letting it sit in some boring old index fund.” I thought, “what’s an index fund?”

Here’s what’s funny, I actually believed him. I thought, “of course, if you pay more in fees you’re going to get a higher rate of return, right?”

Over 90% of the time that’s false. Unless you’re Warren Buffett.

7. Left Too Much In Cash

When I first started transferring money from my bank account to my Roth IRA, I was making the mistake of thinking that was all I had to do.

After some time, I realized the cash I transferred was sitting in a money market account which is basically the same thing as a savings account!

Related: Where to Stash Your Cash

I didn’t realize I had to actually go in and invest the funds myself.

When I started deploying the cash, I thought I was in a 100% equity fund.

But their most aggressive option was between 70% – 80% equities and 20% – 30% fixed income. This money was going to be invested for 40 years and I was sitting on nearly 30% bonds in my early twenties!

That didn’t make any sense.

8. Compared My Results With Benchmarks

Comparing my results was one of the investing mistakes because it caused unnecessary stress.

But in the end, it was good because I compared my return against the S&P 500 and was underperforming quite a bit ( I should say A LOT).

I didn’t get it because it was “actively managed.”

That same year the market as a whole earned a rate of return of 21.31%!

Only one year did the fund perform better than the S&P 500 because it lost less money (which was in 2008).

Related: I Don’t Know How to Invest & I’m Scared I’ll Make a Mistake

What Changed For Me?

For those that aren’t sure of what a Roth IRA is and why you would want to open one, I will share a few things.

If you already know the benefits of a Roth IRA, go ahead and skip to the next section.

A Roth IRA is simply a retirement savings account that anyone with earned income can start. “Roth” is the last name of Senator William Roth, the person who came up with the idea.

The money you deposit has already been taxed. So when you go to withdraw the funds at age 59½ or for qualifying reasons before age 59½, you don’t have to pay taxes on what you withdraw.

How Are Roth IRAs Taxed?

Imagine you’re a wheat farmer. You plant seeds and harvest the wheat.

Would you rather pay taxes on the seed or the harvest?

Your decision is solely based on whether you think taxes will be more in the future.

I’m a big fan of the Roth IRA, especially if you’re young, even if your employer offers a 401(k) (which you should be contributing to also).

However, if you also open a Roth IRA, instead of contributing more to your 401(k) above and beyond the employer match, you could put that extra money in a Roth IRA.

Why would you want to do that?

You can take your contributions out of a Roth IRA anytime you want.

You may withdraw your contributions penalty-free at any time for any reason, but you’ll be penalized for withdrawing any investment earnings before age 59 ½ unless it’s for a qualifying reason such as purchasing a house, education, or the Coronavirus pandemic.

Age 60 may sound like an eternity and who knows what’s going to happen between now and then. Wouldn’t it be nice to be able to access your funds if you really needed them?

I recommend not taking the money out but isn’t it nice to have options?

If you have all of your money tied up in a Traditional IRA or 401(k), the only way you can access any funds before age 59 ½ is paying a 10% penalty or taking out a loan against it. Or if something like the CARES Act comes along.

I Jumped On The Vanguard Bandwagon

After learning about fees, asset allocation, and risk tolerance, I sought out the best investment for myself. I stuck with USAA for about a year and decided to start looking at Exchange Traded Funds (ETFs).

The fees are lower, I could have my target asset allocation, and they’re more tax efficient.

But even the funds I was finding had an expense ratio of ~0.30%.

So after exhausting my options, I decided to jump ship and transferred my Roth IRA to Vanguard.

Vanguard was started by a man named John Bogle in 1975 with the goal of bringing to the individual investor the option to invest in broad-based low-cost index funds.

And as the name implies the company has been a vanguard in the financial services industry. Their average net expense ratio is 0.10% (U.S. asset-weighted fund expenses as a percentage of 2018 average net assets).

Why a Vanguard Roth IRA?

Their core purpose is, “To take a stand for all investors, to treat them fairly, and to give them the best chance for investment success.”

I’m a big fan of Vanguard and when you combine it with the benefits of a Roth IRA, the chances of investment success start to look really nice.

I invested the majority of my funds in the US stock market with a little exposure to the rest of the world.

Now I wake up every morning knowing every person in America goes to work to make me rich. By owning the entire stock market, I own a small share of every publicly traded company in the U.S.

Here’s What Would’ve Happened Had I Not Fixed My Investing Mistakes.

If I maxed out my Roth IRA every year for 40 years while it was invested in UCGAX, my expected return would be about 4.8% after fees.

This would hypothetically leave me with $632,850 when I retire. Not Bad.

The same amount of money was invested in both cases but the returns, asset allocation and fees are way different!

I can’t say this will be 100% accurate but this is no small number guys! It’s worth it to learn about investing and make sure you don’t make the same investing mistakes I did.

I made a lot of investing mistakes:

You don’t have to make the same investing mistakes that I did.

Take the investing mistakes I’ve made and learn vicariously through me so you can get started the right way.

If you’d like to get a better grip on your finances and avoid making investing mistakes, sign up for my Free 7-Day Transform Your Finances email course here.

And if you’d like to read the book that opened my eyes to investing and helped me realize all of the investing mistakes I’ve made, it’s called the Simple Path to Wealth.