Living a Life of Simplicity and Independence 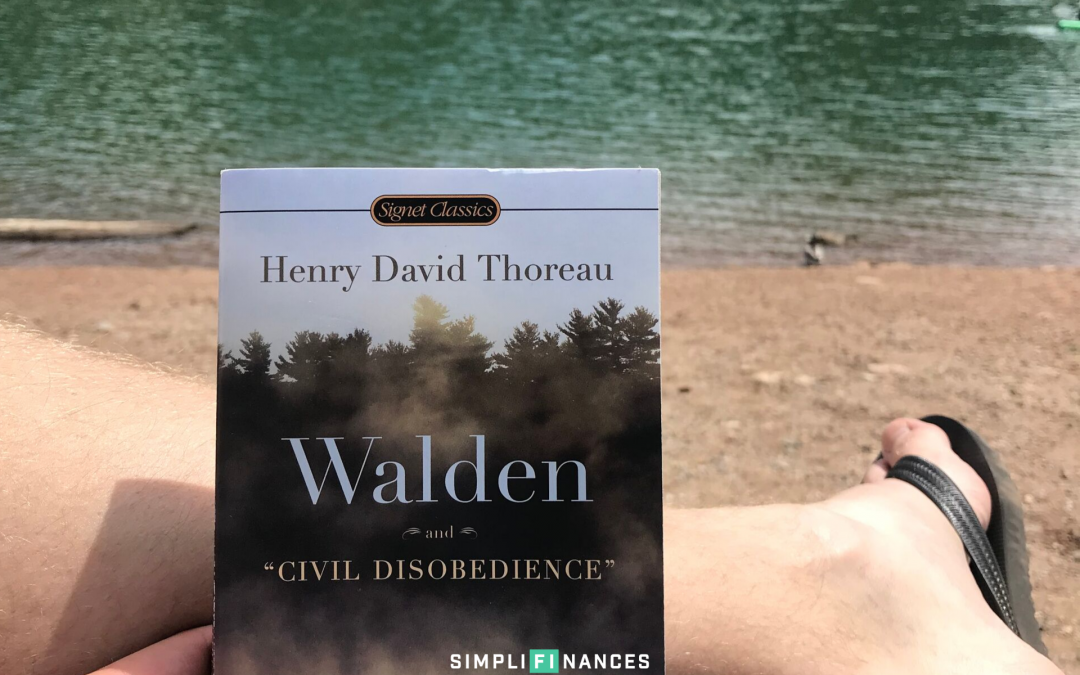 What I share on my site is not only about personal finances, it’s about living a better life.

A life of simplicity and independence.

Nothing has given me more happiness in my life (other than my family) than finding ways to live a life of simplicity and independence.

Today, I’m sharing with you a great book that I recently finished that gave me a better outlook on life.

“The purpose of a good book is to help us remember old truths.”

I went back to the 19th century and found some old truths from one of the founding thought leaders, Henry David Thoreau, on what it means to live a meaningful life.

He’s most famous for his book titled, “Walden.”

Walden is the place he went to live by himself for two years. His purpose in going to Walden was to transact private business with himself.

At age 28, he set out to live a life a voluntary simplicity and independence. He believes you only need four things in order to live comfortably:

He was the ultimate OG minimalist.

You may have come across his content in the past or seen his quotes. He’s famous for the quote,

“The mass of men lead lives of quiet desperation.”

The first time I came across his writings, I was in a college class called Foundations of Business Thought. At the time, it was the most boring stuff I had ever read and made no sense. I didn’t try to get into it either because I usually didn’t read homework assignments.

I tried to at the time and got nothing out of it.

Later, a good friend mentioned to me the book and said it was a great book about living a life of simplicity and independence. So I decided to buy it off Amazon for a few bucks.

I’m so glad I did and that I took the time to really understand it!

If you decide to read it you could probably get it from the library for free.

Here are a few of my favorite experts from the book:

“My purpose in going to Walden Pond was not to live cheaply nor to live dearly there, but to transact some private business with the fewest obstacles.”

“It is very evident what mean and sneaking lives many of you live, for my sight has been whetted by experience; always on the limits, trying to get into business and trying to get out of debt.”

“In the long run men hit only what they aim at. Therefore, though they should fail immediately, they had better aim at something high.”

“Public opinion is a weak tyrant compared with our own private opinion. What a man thinks of himself, that is which determines, or rather indicates, his fate.”

“It would be some advantage to live a primitive and frontier life, though in the midst of an outward civilization if only one learn what are the gross necessaries of life. By the words necessary of life, I mean whatever, of all that man obtains by his own exertions, has been from the first, or from long use has become, so important to human life that few, if any, whether from savageness, or poverty, or philosophy, ever attempt to do without it. The necessaries of life for man in this climate may, accurately enough, be distributed under the several heads of Food, Shelter, Clothing, and Fuel; for not till we have secured these are we prepared to entertain the true problems of life with freedom and a prospect of success.”

“Most of the luxuries, and many of the so-called comforts of life, are not only not indispensable, but positive hindrances to the elevation of mankind.”

“No man ever stood the lower in my estimation for having a patch in his clothes; yet I am sure that there is greater anxiety, commonly, to have fashionable, or at least clean and unpatched clothes, than to have a sound conscience. Who could wear a patch, or two extra seams only, over the knee? Most of us behave as if they believed that their prospects from life would be ruined if they should do it. It would be easier for them to hobble to town with a broken leg than with a broken pantaloon.”

“But if my jacket and trousers, my hat and shoes, are fit to worship God in, they will do.”

“Many a man is harassed to death to pay the rent of a larger and more luxurious box.”

“In the large towns and cities, where civilization especially prevails, the number of those who OWN a shelter is a very small fraction of the whole.”

“The savage owns his shelter because it costs so little, while the civilized man hires his commonly because he cannot afford to own it.”

“An average house in this neighborhood costs perhaps eight hundred dollars, and to lay up this sum will take from ten to fifteen years of the laborer’s life, even if he is not encumbered with a family. So that he must have spent more than half of his life commonly before his wigwam will be earned.”

“Most men appear never to have considered what a house is, and are actually though needlessly poor all their lives because they think that they must have such a one as their neighbors have. It is possible to invent a house still more convenient and luxurious than we have, which yet all would admit that man could not afford to pay for. Shall we always study to obtain more of these things, and not sometimes to be content with less?”

Because his writing is old English, it can be hard to understand, but his message is powerful!

I found it interesting that he thought 200 years ago people were too focused on “material” objects. If we could only see what the world is like today.

If simplicity and independence is something that interests you and you think you would get value from reading this book as I did, I highly recommend it to anyone needing some inspiration. I encourage you to read this book, not as something to quickly get through and check it off your list, but something you really take the time to read, understand, and digest.

It could be life changing for you.

Consider purchasing it here and let me know what you think!