Experiments in Financial Independence with Instacart 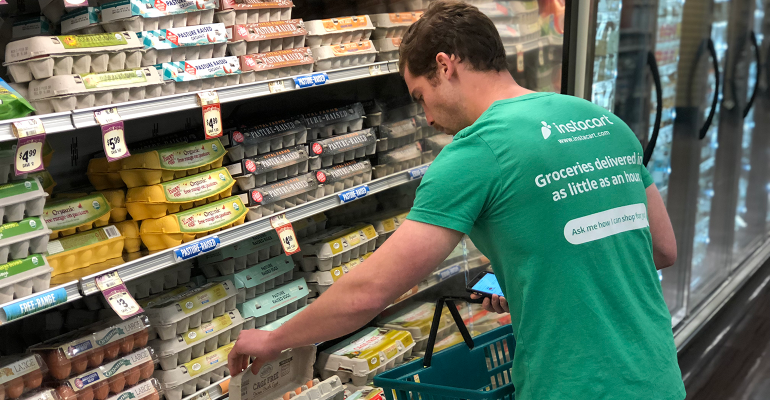 As a financial coach, I get the question all of the time, “how can I make a little extra money in order to cover my bills?”

One of my hobbies is side hustling and I wanted to experiment with something new and show you that it’s possible to make some extra money on the side. This is something you can do too!

The day after we got home from the hospital when our son was born, it was a cold day in February in the Rocky Mountains. We didn’t want to leave to buy groceries but we needed food. We heard that Costco had announced that it was offering grocery delivery in less than one hour.

So we said what the heck. Why not give it a try? So we ordered some cereal, bread and other necessities like Boom Chicka Pop. Within 45 minutes someone was dropping our groceries off at our door. My wife and I looked at each other when he knocked like, woah! We left him a tip and that experience always stuck with me.

Related: The Complete Guide to Reaching Financial Independence Through Simplifying

I wondered if that was a good side gig. I did some research and realized it’s possible to make somewhat decent income on the side. I tucked that idea away for a little bit and it wasn’t until recently that I thought I would try it out.

I signed up for Instacart through the Steady app which is an app that is a central location for all sorts of different side hustles. Signing up was simple and within a few days I had a debit card and a lanyard sent to me.

I activated the debit card and was able to pick a 5-hour window to work during the upcoming week.

Before I started the shift I was nervous. I didn’t know if I would get work right away or if I would just sit there the entire time because no one buys groceries online to be delivered to their door.

I live really close to Costco so I just waited at my house until an order popped up. After about 30 minutes of waiting for a notification, it happened. I jumped in my car and headed to the store.

My first order was from a man named Randy and he bought 6 items from Costco.

As I got to the store and started shopping, my inside Costco location skills were tested and I definitely didn’t get all of the groceries in a quick and orderly fashion. I was all over the place!

As I was shopping for the items I had about 45 minutes to get the groceries to the customer’s house. So I had a little bit of time to squeeze in for a Field Agent job as well. What that is, is occasionally you can get paid to take pictures of things inside of a store. I was paid $4.00 to take a few pictures of the toy section at Costco.

When it came time to check out I stumbled a little bit. I swiped the card and it asked for a pin. I didn’t know the pin and so I panicked. Turns out I had to check the app to find the debit card pin before I checked it out. But I was eventually able to get the groceries paid for.

Now it was off to the races. I had a few minutes to deliver the groceries to Randy. He lived in an apartment complex but luckily I was able to quickly find his. I showed up on time with the groceries in hand and my lanyard around my neck.

I walked up to the door and no one answered. But I could hear someone inside. So I waited and waited. After a minuted or two of waiting a man came to the door with no legs. And he couldn’t really talk. But he pointed to the kitchen and I walked in and left the groceries for him. He was a very friendly guy but I couldn’t help but feel sorry for him.

As soon as I left his house it hit me. This is pretty cool. I get to help people make their lives easier and simpler. He probably couldn’t have made it to the store on his own and he probably didn’t have anyone that could do shopping for him. I felt like a good citizen doing a good deed for another person.

We all need to eat and going grocery shopping can be a real hassle for a lot of people.

After I finished up that order I went back to Costco and waited a few minutes. Nothing was coming through so I decided to take my chances and go and workout at my gym across the street. I was able to nearly complete an entire workout when I got a notification for another order.

I hoped in my car, crossed the street and did my second order. Except this order was different. As I was walking into Costco, I realized that this order had a ton of items. I didn’t know how I was going to fit it all in my car let alone one cart. It took me a while to gather all of the items and I had to use two carts but I was able to get everything in my car and then it was off to the races.

When I got to my delivery destination I noticed it was at a church. I thought that’s a smart church! They’re trying to save time. I asked them what it was all for and they said it was for their members for church tomorrow. Keep in mind this was on a Thursday. I didn’t know people went to church early on a Friday morning.

I had people help me bring in all the groceries and they left me with a $15 tip which I thought was very thoughtful.

So if you want to get started here’s how:

Download the Instacart Shoppers App and it’ll walk you through the steps to sign up. It’s really simple and I was approved within a couple of days and the Instacart debit card and lanyard showed up at my door.

Once you’re approved and you have your stuff you will need to set your hours. I live in a college town and so I think there are a lot of other students in town that are shoppers and so the hours were limited. But I was able to schedule a shift for the following week.

Once you start your shift you just wait for the notifications to start coming in and get to work! This is just one more way to help you on your path to financial independence.