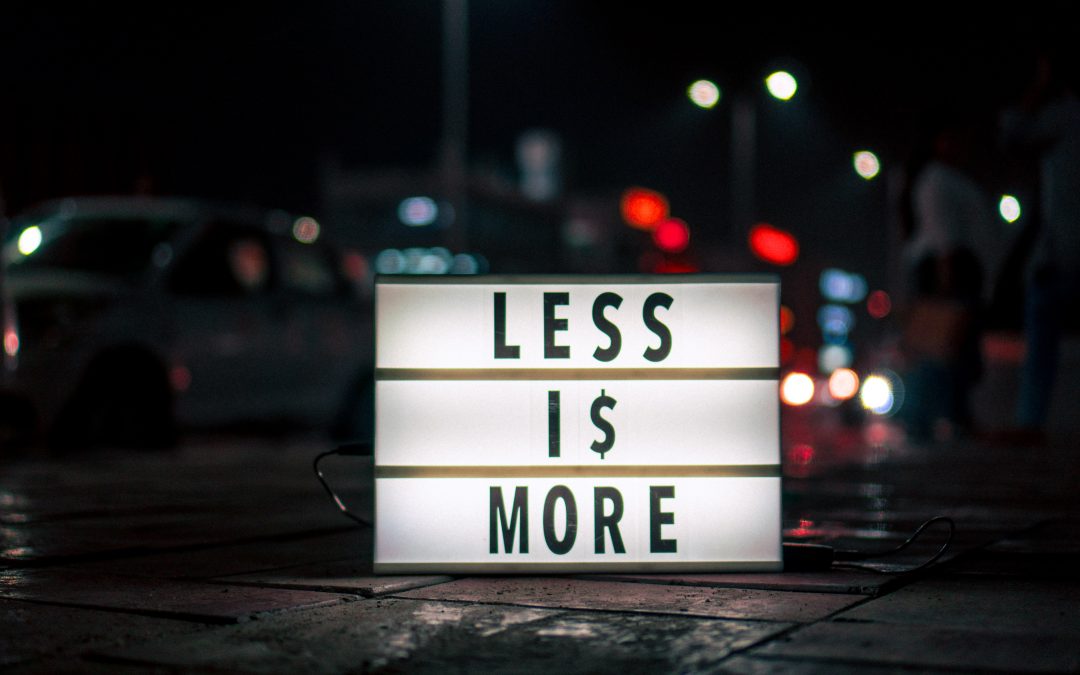 Let me start by telling you a story about wanting less.

Have you ever had to fix a broken faucet?

We recently bought a house that had a leak in the guest bathroom. I shut off the water to the house for a few minutes and took apart the bathtub faucet. An internal part was broken which I learned from watching a few YouTube vidoes.  I didn’t have the part that I needed so I took a trip down to the local Lowe’s.

I left the water to the house off because the tub was taken apart. Kenzie was worried about not having running water to make dinner while I was gone and I told her I would only be a few minutes. By the time the water was turned back on it had been almost two hours. Just in those two hours, we went to the kitchen sink at least 8 times to turn the water on, and nothing came out.

Going to the sick to turn the water on is so common that we don’t even have to think about it. At dinner, we talked about how much we take for granted the fact that we have running water at all times. After dinner, I told my Kenzie I’d be back in an hour to fetch a pail of water (joke).

Could our ancestors have ever imagined all of the luxuries of life that we get to enjoy?

We have it so good

An air conditioner cools our house, a microwave heats up our food, a fridge keeps our food fresh, and we have the ability to connect to anyone in the world in a matter of seconds. We can even hop on a plane and in a few hours land anywhere in the world. Not even the greatest kings and pharaohs could’ve done that no matter how much wealth they had.

Perhaps I’m weird for always thinking about this but the bottom line is we have it sooo good.

Why are so many people unhappy?

Even with all of these things that we take for granted, why do people feel like they will never have enough?

We’re in the most abundant country in the world. Literally anything you want can be delivered to your door in two days. We live a place that provides everything you could need.

Too many people are focused on acquiring more. More money, more status, more stuff. It leads to discontentment. It’s called the “Comparison Trap.“

In the words of C. S. Lewis: “Pride gets no pleasure out of having something, only out of having more of it than the next man. … It is the comparison that makes you proud: the pleasure of being above the rest. Once the element of competition has gone, pride has gone.”

When we fall victim to the ‘comparison trap,’ it’s just another way to find fault with ourselves and engage in self-sabotage. If you’re constantly comparing yourself, it’s almost impossible to achieve full happiness.

It’s so counterproductive when we use arbitrary standards to compare ourselves to others, ultimately affecting our self-confidence and self-worth. Who has the bigger house. Who has the best lawn … the best car … the more prestigious job? The circle of comparison widens in a never-ending battle of who has made it?

Intrinsic worth and net worth can and perhaps should be mutually exclusive. The basis of self-regard and confidence should not be dependent on a faulty foundation (e.g., the size of a house).

Is it possible to be financially free by wanting less?

Simply saying, “I don’t want anything else,” won’t make you financially free. It doesn’t happen like that. But what if you could change your desire over the next year or few years to be content with where you are and who you are?

What if you could get to the point where you actually had everything you need?

One of the great challenges in life is learning to be ok with what you have, even though it’s human nature to always want more.

How to start on the financial freedom path by wanting less

I want just enough money and stuff to be financially free, and I don’t need hundreds of millions of dollars to feel free.

How much do you need to feel good with your life the way it is today?

At Simplifinances, my mission is to help you become financially free not just by making more money and increasing your wants, but by living simply and wanting less.

I want you to enjoy the journey, not succumb to someday syndrome. You have what it takes to be financially independent.

It first starts with your mind set. You may never feel satisfied if you’re always pursuing more.

How can you free yourself from unhappiness and debt and start living the financially free life that you desire?

It’s easy to get caught in the fast lane and forget to stop and show your appreciation for what you do have. A life well lived is one of gratitude and thankfulness.

This is foundational in building the life you want. More won’t make you happy.

I put together a free PDF that you can download to help you start feeling grateful for all that you have.

Build this foundation, and you will have more opportunities come into your life but this time you will be more selective.

You have what it takes to be financially free by wanting less.

Self-awareness was first theorized in 1972 by Duval and Wicklund in their book, “A Theory of Objective Self-Awareness.” This book argues that if we focus our attention inwardly on ourselves, we tend to compare our behavior in the current moment to our general standards and values. This triggers a state of impartial self-awareness.

Self-awareness is a vital first step in taking control of your life, creating what you want, and mastering your future. Where you choose to focus your energy, emotions, personality, and reactions determines where you will end up in life.

I’m not promising you will have all the riches and wealth you will ever need. I’m not saying you won’t ever have problems in your life if you’re just grateful and self-aware. But what I am saying is you have what it takes to feel free. You will not be happy if you always want more. Stop comparing yourself to others.

I look at financial freedom slightly different. It doesn’t have to be a jet and expensive hotels every other weekend. It starts with your thoughts of wanting less and being happy with what you have. 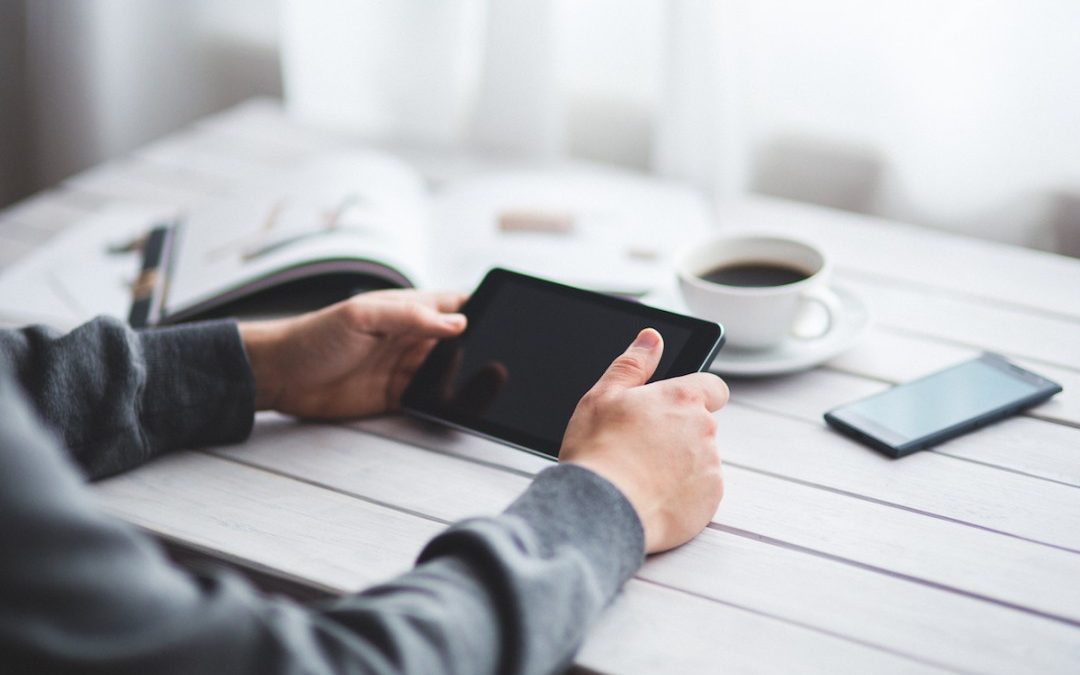 8 Ways Minimalism and Money Are Related

As a kid, I showed signs of minimalism in at least three ways. One was each time I cleaned the kitchen I had to have everything off the counters. Second, I got a lot of satisfaction out of finishing all of the food in the pantry. And third, I loved the feeling of getting rid of stuff.

Today, I still do this (I think it drives my wife nuts)!

In a way, I’ve always been somewhat of a minimalist but I’ve never defined myself as a minimalist. I consider myself more of an “aspiring minimalist.” I don’t rank up there on the minimalism scale but I do love living a simple life, with a neat and clean home, and trying to get rid of stuff I don’t need.

It wasn’t until I watched the documentary on Netflix about minimalism that I was able to recognize it as a life optimization strategy.

Since then, I’ve learned more about it and discovered that when you’re trying to get the most out of your finances there is a natural progression towards minimalism. You start to ask yourself, “what do I value and what am I willing to spend my money on?”

The great thing? Most people that actually reach financial independence do it by adopting some level of minimalism in their life.

First off, what is minimalism?

It’s about eliminating clutter in your life. Both physically and mentally.

Minimalism is cutting out the unnecessary stuff in your life so you can focus more of your time and effort on the things that really matter. When some people first learn about minimalism, they think, “why on earth would I do that to myself?” But as they learn more and adopt this way of living, it’s hard to go back to your normal way of consuming.

Minimalists search for happiness not through things, but through life itself.

Other than when I was in high school when I had to have the nicest pair of basketball shoes, I’ve never been that interested in having nice and fancy things. I’ve always driven an old car paid for in cash, had few possessions, and tried to put my money towards savings or just watching my stash of cash grow.

Minimalism is a tool to rid yourself of life’s excess in favor of focusing on what’s important—so you can find happiness, fulfillment, and freedom.

When you call a person a minimalist, you’re describing their interest in keeping things very simple.

Minimalism is not about deprivation. My purpose in living a simple life has never been to get rid of everything in my life.

It comes down to getting rid of what you don’t value in your life and adding in what you do value. One way I heard it described is a “valuist.” So if you have a ton of crap, get rid of it. If you have destructive relationships figure out how to make it better or get rid of that person. If you find yourself mindlessly wasting time and scrolling through social media, place limitations. Your future self will thank you for doing all of these things.

Money is absolutely related to minimalism. People who find themselves living a simpler life are not worried about keeping up with the Joneses and typically have more money and more peace of mind.  Here are eight ways they are related:

Financial independence is largely controlled by your expenses.

What do you get when you combine simplicity with your finances? You get financial independence.

No one becomes a minimalist after one day of learning about it. It’s a constant gradual progression into weeding out the unnecessary and replacing it with what you value.

How to get started.

The 30-Day Minimalism Game. Get rid of one item a day for 30 days. I’ve heard this is a great way to get started.

Or you can do what we did and just have a big garage sale and get rid of a bunch of things at once.