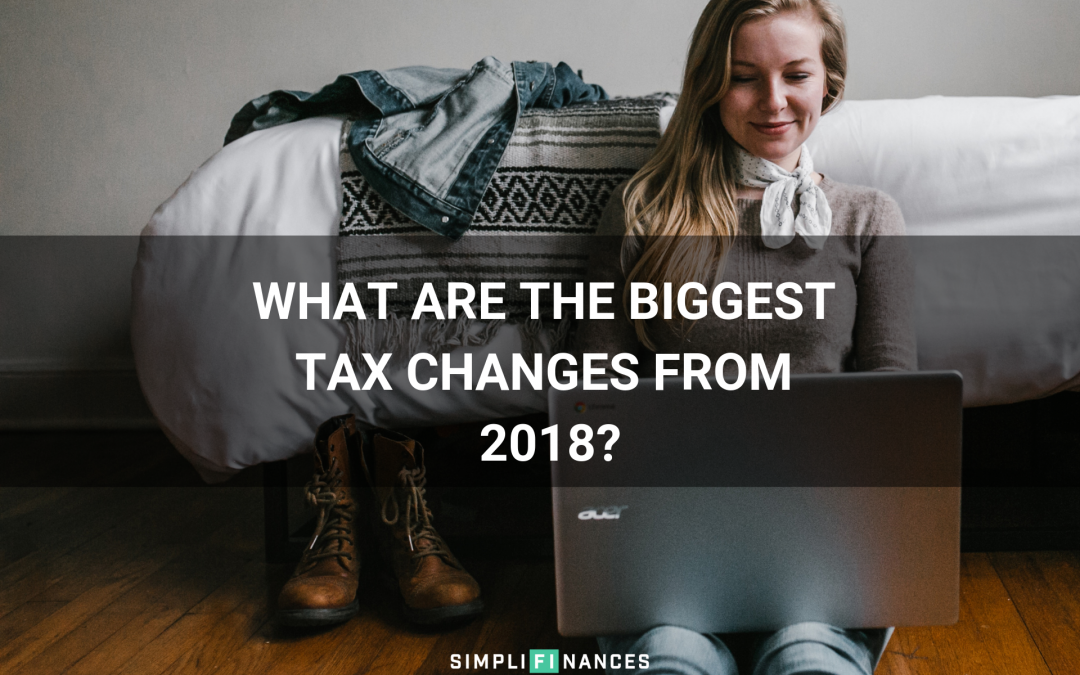 What Are the Biggest Tax Changes From 2018?

You’ve probably heard about the changes to the tax law that will take effect when you file this year, and your head may be spinning.

Don’t worry – today I’m going to give you an update and try and simplify it for you. Even though the tax bill brought some really big changes, in a lot of ways it simplified many things. We love when things are simple.

I dove deep into the new tax reform details when I took Personal Income Tax Accounting in the fall of 2018. I feel qualified to discuss taxes because few people have studied the changes. I will shed some light on things that could help you.

I  also sat down with my professor, Kirsten Cook at Texas Tech University, who has a Ph.D. in Accounting and is a CPA and got his input on the biggest tax changes.

I’m not a CPA, nor do I plan to become one. Don’t take what I say as tax advice. This post is intended for educational purposes only. It’s good to have a general idea of the changes that are coming and how it will impact your personal finances. If you have specific questions related to your situation, consult a tax professional.

What are the biggest changes that will affect the amount you pay in taxes this year?

One of the biggest changes in 2018 is the income brackets and marginal tax rates. A marginal tax rate is simply the percentage of your income that you pay taxes on the more you earn. Depending on how much you make, your income is taxed at many different rates, not just one.

You can figure out your marginal tax rate by viewing the charts below and finding out which tax bracket you fall into.

Lower marginal tax rates mean you can pocket more money from your paycheck!

Compare these to 2018 numbers.

Changes to the Standard Deduction

Another big change to the 2018 tax reform bill was the standard deduction. They’ve nearly doubled!

A standard deduction is an automatic deduction in what you owe in taxes. You don’t have to take the standard deduction though. You could potentially deduct your taxes more if you itemize. This simply means taking all of your qualified expenses and adding them up. This is more of a hassle and it’s estimated that the number of people who are itemizing is going to drop by 56%.

Here’s a quick look at a comparison of the standard deduction last year to this year:

From the chart above it clearly looks like you’re going to be saving a lot more money in taxes in 2018. But keep in mind that the changes got rid of the personal exemption, the amount deducted from taxable income for individual taxpayers and any dependents claimed on their tax return.

The government simplified this portion of taxes, which we like!

“The increase in the standard deduction makes up for the elimination of personal exemptions, leaving most Americans with quite a bit more money in their pockets.” – Dave Ramsey

Children. It makes no economic sense to have them, almost nothing requires more time and effort, we don’t get paid to raise them, in fact, we have to pay to raise them, and yet the population continues to grow. Thanks to the changes in the Child Tax Credit, raising little ones in 2018 and beyond makes more financial cents!

Speaking of children, if you have a 529 college savings plan up until now it could only be used for qualifying college expenses. Now, you can use it for education other than college. For example, private school, tutoring, etc.

Entertainment is no longer a business deduction

The estate tax is money you pay on inherited money and property. In the past, there was a 40% tax rate on money and property received over $5.49 million. Now, you can inherit $11.2 million in your lifetime without paying taxes on it. And if you’re married that means you can receive $22.4 million and avoid any estate tax.

Since almost no one inherits nearly a quarter of $100 million dollars paying estate taxes for nearly everyone has become non-existant.

Because corporations got such a big tax break, lawmakers wanted to also give small business owners a tax cut as well. And so they introduced the Qualified Business Income (QBI) also known as the 199A deduction, which gives most pass-through entity businesses the ability to deduct 20% of income earned in 2018 up to a certain level.

There are some limitations and uncertainties about the 199A deduction. Learn more here at irs.gov

As you can see, there are a lot of changes when you file this year. I’ve only begun to scratch the surface of all of the changes.

Even though the changes simplified many things, it’s all still pretty complicated. You may feel confident doing your taxes on your own and if you do then visit www.myfreetaxes.com to see if you qualify to file for free.

If you have a complicated tax situation or you own a small business, working with a pro is likely the smartest move. In those scenarios, a missed deduction on your part could cost you a lot more than working with a pro.