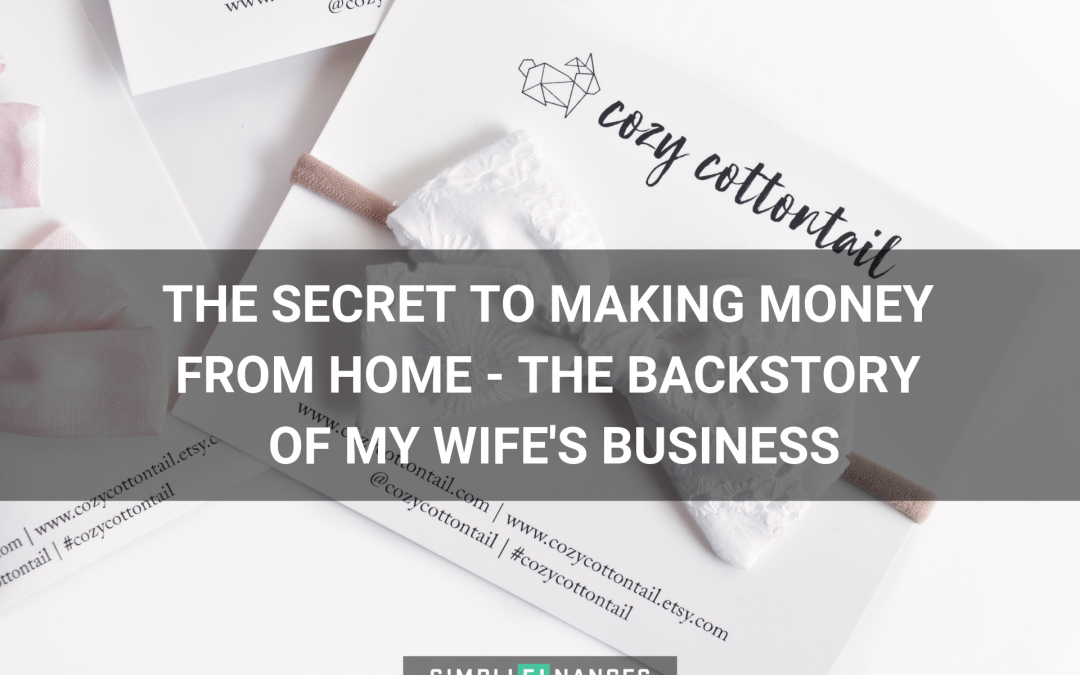 Yes, you read that correctly.

I’m pulling the curtain back a little and writing about the backstory of my wife’s business.

A few years ago, my wife Kenzie thoroughly disliked returning to a cubical day in and day out to go to work as an office manager.

She eventually quit that job and didn’t want to go back to another one she hated but wanted to find a way to be her own boss. We wanted to eventually have kids and she told me how much she would love to be able to work from home.

There’s an artsy, creative side to Kenzie. She has gone from one project to the next her entire life and some of them actually got finished.

This week, I’m writing about how she started a successful business working from home because she is making me do it.

My wife didn’t make me. I don’t even think she knows I’m writing this right now.

I think she forgot that I even have a blog and actually have an audience who reads my stuff.

But she did start a successful at home business and I wanted to share the story that she is too shy to share.

Ever since she started the business and has grown it into what it is today I constantly get questions about how she’s been able to work from home and balance taking care of our son.

And the reality is I have no idea how she’s been able to do it. She’s basically a world-class mompreneur and I just pretend that I played some role in making it happen.

If you want inspiration on how to start a business from home you can check out my wife’s business at cozycottontail.com and you can also read the ultimate guide to making side income.

And if you’re like me and don’t care much about sewing or baby stuff, but you have a spouse that does… share the website with them. But, be careful not to let your wife run wild with the credit card because you might end up with a few packages on your doorstep. This is a personal finance blog about teaching you ways to save money. So beware, my wife makes good stuff.

But speaking of saving money, my wife is actually launching a bow subscription this week that’s quite affordable. You can join the waiting list here and see that the tagline is even “the bow subscription that will make your husband happy too.”

Anyway, back to the reason why I wanted to write this post today.

Getting the business to where it is today hasn’t come without a great deal of struggle.

In the beginning, she had no idea what she would even call the business. I told her it doesn’t matter. I said, pick a name that you’re 80% happy with.

The name of her first business was All Things Unnecessary. For her first idea, she wanted to make iron board covers to cover up the ugly pattern nearly ever ironing board has. It was nice, but it was unnecessary.

The biggest thing was she got started. So much has changed from the beginning but she never let the fear of failure stop her from trying something new.

It honestly took about a year before she saw any traction and somewhat consistent sales. I could count at least 5 or 6 times that we had a serious conversation about whether or not she could just quit and go find a full-time job.

There have been so many nights that she stayed up working late to complete orders and work on the business. As hard as it has been, it’s been terribly fun to see how much success she’s had.

I continued to work full-time while in school and she worked from home to grow her business. She went all in creating blankets, bows, bibs, embroidery, and so much more.

She started out selling on Etsy and had a lot of success there. She then set up her own shop using Shopify to sell her products.

Just as things started to get busy we found out that she was pregnant. We were terrified. We had also talked about moving to Texas to pursue a master’s degree. Which is what we did, hence the reason why we live in Lubbock, Texas.

Which I’m sure you hadn’t heard of this place until the NCAA March Madness tournament. That’s right. Texas Tech is playing in the championship game tonight against Virginia. It’s one of the biggest things to ever happen to this city. The last team from Texas to make it to the final four was in 2000. The last team from Texas to win the entire thing was I believe back in 1968. So this is kind of a big deal.

I’m sorry, I got off topic again. But I really hope Texas Tech wins tonight! That alone would make moving here worth it. Forget about school.

As my wife’s business was growing, everything got put on hold when our son was born. Then six months later we packed up the moving truck and moved to Texas. She wasn’t able to fully set up shop again until August of 2018.

Because she took a break for a few months and had a lot of time to think about what she wanted to do when she started it up again there was an entirely different focus and determination.

Every month has been better than the next, increasing revenue and profit. March 2019 was the best month that her business has ever had.

This year she introduced two new products to the lineup. Cozy the Cottontail (the signature bunny) and a bow subscription that launches this week.

One other thing has been in the works for a few months and who knows when it will be released but when it does it will be big and could completely change the game.

We would love it if you supported the business by joining the email list or following Cozy Cottontail on Instagram!

Do it for me. Help me look like a good and helpful husband. Cozy Cottontail is how I will reach FIRE (Financial Independence/Retire Early). All of the schooling I’ve put myself through will become irrelevant because I will have to start working for my wife’s business. This is my master plan.