The True Financial Cost of Serving A Mission 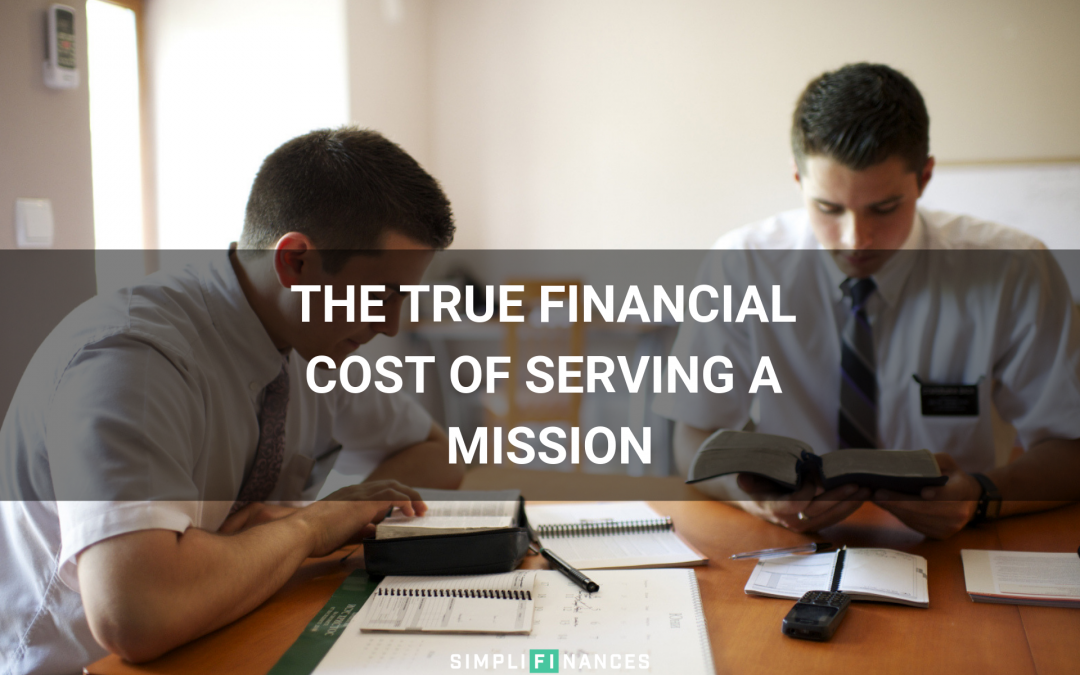 Five years ago from last week, I returned home from a church service mission. This mission lasted two years and it was all voluntary.

Every year tens of thousands of young people drop everything they’re doing and leave their friends, families, jobs, and school to serve a mission. It’s a big sacrifice!

Most missionaries are under the age of 25, serving in more than 400 missions throughout the world.

Missionaries receive their assignment from Church headquarters and are sent to countries where governments allow the church to operate.

Missionary work is voluntary. In fact, missionaries fund their own missions and are not paid for their services.

What is the financial impact of serving a mission?

I ran the math to see what financial impact serving a two-year mission would have. So today, I’m going over the true financial cost of serving a mission, not just for two years but over a lifetime.

After writing this I realized it might discourage someone from serving a mission, but that’s not my intent at all! My intent is to shed some light on the sacrifice missionaries are making.

Growing up, I wasn’t expected to serve a mission but it’s something I decided to do after I turned 18. I was working and going to school full-time, and in March 2012, I put it all on hold.

My letter to Texas

I had no idea where in the world I would be the next two years. I found out from a letter in the mail and I opened it with some of my close friends and family. I was thinking of Sweden or Africa. Nope, I was called to Fort Worth, Texas.

We happen to be in Texas right now. As I’m writing this I’m sitting downstairs in a hotel lobby in Austin, Texas while our son takes his nap. We will be visiting Killeen today (where I spent the first 6.5 months of my mission) and moving on up northward.

At first, I was disappointed. It wasn’t a foreign country but it was a Spanish speaking mission. And after a few days, I was excited to go to Texas.

On March 7th, 2012, I left and started the next chapter of my life. I gave up a lot to do this including dropping out of college. Some people have asked me, why would you give up this valuable time to do something for so long that isn’t even paid?

Even though it was only two years, I left in the middle of a semester. So I not only gave up two years but actually took off three years of college.

It was difficult coming home because I was behind in school and work and was starting over from ground zero.

Everyone knows missionaries give up a lot, but I haven’t seen anything about the financial impact that it has over a lifetime.

I’m going to use a general example to try and quantify what missionaries give up.

If you served a mission, you may not realize what you gave up and if you’re planning to serve a mission this may help you understand the sacrifice you’re about to make. I would never discourage anyone from serving a mission. I simply want to put a number on it.

This missionaries name is Kyle. Kyle finishes high school and decides to complete one semester of college before going on a mission. The next semester he leaves for his mission and takes off three years of college. He’s been saving up for many years to go on a mission but doesn’t have enough to fund the entire thing.

He gives up earning income. What does the average 18 to 19-year-old make in America?

According to The Bureau of Labor Statistics, the average wages of 16 to 19-year-olds is $420 per week, $21,840 per year. That’s the average across all races, genders and education levels.

This may not be accurate for your situation but some 18 to 19-year-olds may have no income during those years and others may make more than that. I would say that’s a good average.

Let’s suppose his take-home pay is $19,656 after tax. He has always been taught to save at least 10% of his income which he does. So at the end of two years, he saved up $3,931. These savings could be used for a number of things but let’s suppose he decides to hang on to this until he retires along with the initial $10,000. What impact would that have? So far he’s given up a total of $13,931.

What else is he giving up? We need to factor in the cost of extending college out for another three years.

Yearly tuition prices increase by an average of 3.2% at public colleges.

Can we put a number on it yet?

All $15,507 gets dumped into low-cost index funds at the age of 19 and he doesn’t touch it until he is 65. It just sits there for 46 years. How much would it be worth if it earns an annual rate of return of 10% adjusted for inflation?

The amount of money you earn and save while you are young is worth more than the money you will make and save as you get older. Thank you compound interest.

As you can see the decision to serve a mission as a teenager is no small decision. In fact, it’s a half a million-dollar decision when you understand the math behind it.

What about senior couples? Often retired couples will decide to serve a mission. Financially speaking, what are they giving up?

The answer is a lot less. They don’t have time on their side for the money to compound. It’s still a major sacrifice financially but it’s only whatever the cost to serve the mission is because they are already at retirement.

I want everyone to know that a decision to serve a mission at the age of 18 or 19 is literally a million-dollar decision assuming that money was invested consistently and never touched.

The Benefits of Serving a Mission

So why would someone make a decision to give up two years of their life at such a valuable time?

The answer is absolutely. And here’s why:

Life experiences over numbers. The benefits of serving a mission are worth way more than $500,000. And I mean that. I spent two crucial years of my life helping and serving other people which taught me from a young age that life is not simply about going to college, getting a good job and succumbing to lifestyle inflation and being trapped in the hamster wheel. It’s about learning to forget yourself and humble yourself in order to be a force for good and help other people.

The education I got was worth more than a four-year degree. I could not have learned what I did sitting in a classroom for two years. The reason being is a mission is not just a full-time job, it’s literally a full-time, morning until night, 7 days a week life sacrifice.

I became fluent in Spanish. Again, I could not have learned to speak Spanish in two years sitting in a classroom but I was able to attain a decent level of fluency on my mission and it’s something I still use to this day and will always have.

I built lasting relationships with the people that I served and the people I served with. There is no monetary value you can put on having great relationships where you get to connect with a number of people at a very deep level.

I learned to lead. During my time as a missionary, I was in leadership roles most of the time. This is a skill I would not have gotten had I decided to stay home. Leadership is a skill and I believe it will help me throughout my career.

I learned to sell. Selling is one of the most valuable skills you can learn in life and learning to deal with rejection is a big part of that. We constantly had doors slammed in our face and have to overcome difficult objections. If I hadn’t done this I would not have worked in a 100% commission sales job one summer which also taught me how to sell.

I learned to public speak. I had opportunities on a weekly basis to public speak. In district and zone meetings to speaking in church. I spoke more in public in those two years than I probably will in my lifetime.

You can’t place a monetary value on all of these things. And these are only some of the temporary benefits not including many of the benefits from my faith. I don’t intend for this post to be religious in any way but to give readers a clear understanding of what those young men and women you see walking down the street are giving up.

This is not to discourage anyone from serving a mission but to help quantify the sacrifice that missionaries give up. because the intangible benefits will always outweigh the tangible benefits